Part of the charm of Bydgoszcz lies in the fact that it still seems to be an undiscovered city – unexplored in terms of history, architecture and culture. And it is unexplored both for the residents and tourists.

When in summer the latter walk with cameras along the streets of Bydgoszcz they make the locals realize that it is worthwhile to lift up their heads and notice the beauty of old, decorative buildings. Some of the most attractive houses were constructed by Józef Święcicki – one of the most mysterious and creative architects of the late 19th and early 20th century. His works such as the “Hotel pod Orłem” – are real jewels of architecture in Bydgoszcz. While Józef Święcicki, founder of the architectural image of the city, is known only to a few connoisseurs of history of the city, it is probably unlikely that there is any inhabitant of Bydgoszcz who has not heard about Andrzej Szwalbe, creator of the musical image of the city on the Brda River.

For many years Bydgoszcz has been called a city of music. There is no exaggeration in this observation. The city's musical tradition dates back to the 17th century, when in the local Jesuit College there was a theatre with music and singing. The numerous choirs and musical groups that operated here in later years were straight line followers of this tradition. Their task was also to defend and cultivate Polish speech in the city, since a significant part of the population was German. After World War II, Bydgoszcz was proud to have Arnold Rezler’s Orchestra, which from 1945 worked at the Polish Radio Broadcasting Station in Bydgoszcz. 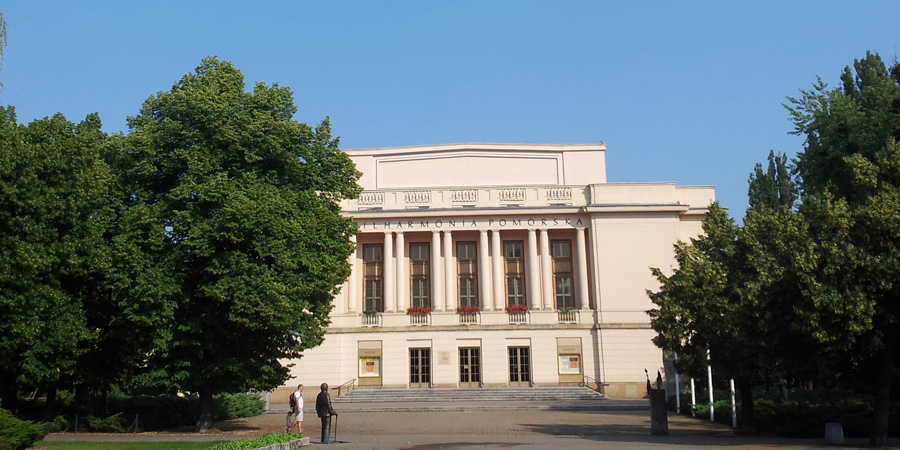 However, the man who recorded this music was Andrzej Szwalbe – a long-time director of the I. J.Paderewski Pomeranian Philharmonic in Bydgoszcz. The Pomeranian Philharmonic that was established on 1 January 1953 is a true pride of the inhabitants of Bydgoszcz. It is not only a place of music, but culture in its wider meaning. Both inside and outside the stately edifice of the Philharmonic we can admire numerous busts of composers, in the interiors there is a splendid collection of tapestries ordered by Andrzej Szwalbe from outstanding Polish artists, there also used to be a collection of 19th century pianos, but it has been moved to the Palace in Ostromecko. The Philharmonic concert hall has the best acoustics in Poland and some of the best in Europe. Hence, outstanding musicians make recordings in it, and in interviews they often express admiration for the acoustics of the concert hall in Bydgoszcz. It is a place that hosts some of the oldest music festivals in Poland. One of them is the Bydgoszcz Music Festival that has been held since 1963 and takes place every three years, another one is Musica Antiqua Europae Orientalis – Festival of Early Music of Central and Eastern Europe. It has been organised since 1966, and hosts artists and musicologists with truly encyclopaedic names. MAEO was born at the time when religious music was rarely performed in concert halls. During 3 weeks of September lovers of music listen to songs written for church purposes, but also pearls of symphony and chamber music. Only then can we admire almost next to each other works by the medieval German composer and mystic Hildegard of Bingen and Krzysztof Penderecki – a frequent guest in Bydgoszcz and Honorary Citizen of the City. The unique character of MAEO lies not only in the original repertoire performed by leading Polish and European musicians, but also in discovering the common past of this part of Europe. The festival is accompanied by musicological conferences with the participation of scientists from academic institutions around the world. This combination of music and science occurs only in Bydgoszcz. 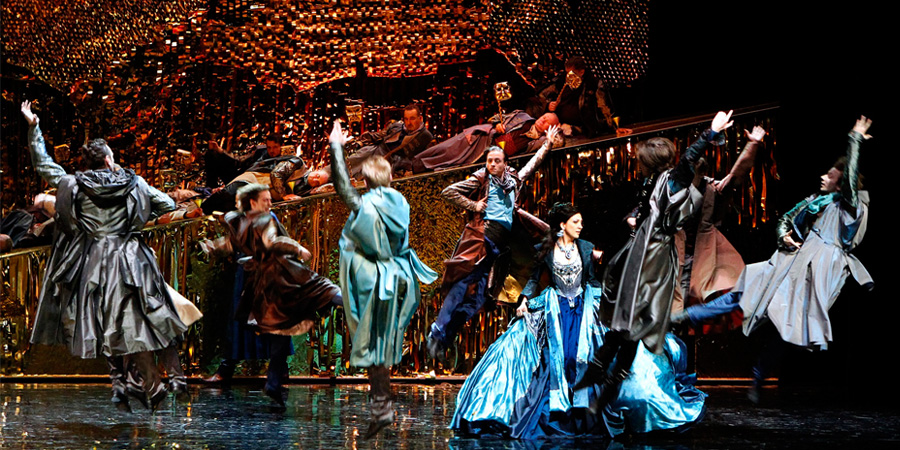 On the other hand – spring always heralds the Bydgoszcz Opera Festival, which was introduced into the music calendar in April 1994. Initially, it was meant to help in the then ongoing for over 20 years construction of the edifice of the opera. The first festival took place actually in the “building site”: bare walls, the audience seated on folding chairs, cables hanging from the ceiling and dust everywhere. However, the atmosphere that was present during the first festival would not be found at any other events of its type. The inhabitants of Bydgoszcz knew that they were witnessing the birth of something very important in Polish culture. Today, the festival lives its own life and the building of the Opera Nova is one of the most modern and beautiful in Poland and since it is located by the riverside, it is a real cultural showpiece of the city. Opera groups from all over the world come to perform here, just to mention a few: a famous, contemporary ballet the Swedish Cullberg Ballet, Bejart Ballet of Lausanne, as well as groups from Cuba, Spain and many other countries. Not surprisingly, the Bydgoszcz Opera Festival attracts opera enthusiasts from all of Poland. It is worth mentioning that the rate of attendance at the performances of the opera is one of the highest in Poland. The repertoire is dominated by the so-called great repertoire, those that the audience loves the most e.g. "La Traviata" and "Nabucco" by Verdi and "Tosca" by Puccini, but there are also less known works that are rarely put on by other opera houses in Poland. Examples could be "Mephistopheles" by Arrigo Boito and "La Gioconda" by Amilcar Ponchielli. Not without reason the eminent music critic Jerzy Waldorff once wrote that "Bydgoszcz is a true musical reservoir ."

Another beautiful musical card of Bydgoszcz is illustrated by the I. J. Paderewski International Piano Competition organized by the I. J. Paderewski Music Society. It is worth mentioning that the first competition in 1961 was won by Jerzy Maksymiuk – today an outstanding conductor. Once every 3 years young, talented pianists from around the world meet in Bydgoszcz to present their talents and the wealth of music by Ignacy Jan Paderewski and other composers of his time. The Competition was accepted by the Federation of International Music Competitions and found itself among the 128 most important music competitions in the world. Without exaggeration we can say that Ignacy Jan Paderewski has become the patron saint of music in Bydgoszcz, due to the competitions, the Music Society, the Pomeranian Philharmonic that is named after him, and finally the airport, which also has the name of this famous statesman and brilliant pianist.

The musical image of Bydgoszcz is completed by the F. Nowowiejski Bydgoszcz Academy of Music whose most famous graduate is Rafał Blechacz – winner of the 15th International Fryderyk Chopin Piano Competition. Concerts by students and teachers of this school, like the series "The Academy in historic monuments," are permanently etched into the city's cultural calendar. The Music District of Bydgoszcz is a truly unique place, the only one of its type in Poland. It consists of three institutions: Pomeranian Philharmonic, the Academy of Music and the Complex of Music Schools. Immersed in the greenery of a park the buildings of these institutions, the busts and statues of composers and the great architecture of the nearby houses and villas are the object of admiration of many Polish and foreign guests.

One of the most vibrant cultural institutions of Bydgoszcz is the Leon Wyczółkowski District Museum with several facilities in different parts of the city, but primarily on the extremely picturesque Mill Island. Here there is Leon Wyczółkowski’s House, that is in fact a museum building where the interior has been restored to look like Gościeradz estate, where at the beginning of the 20th century lived the patron of the Bydgoszcz museum Leon Wyczółkowski. In the museum we can admire the beauty of paintings and prints by Wyczółkowski in all their fullness and enjoy the specific atmosphere of the belle époque. The collection of his works that belong to the District Museum in Bydgoszcz, especially the drawings, is one of the largest and among the most interesting in Poland. According to the will of the painter, after his death in 1936, his wife Franciszka donated several hundred drawings to the museum. Wonderful landscapes, urban architecture, genre scenes, bouquets of flowers, trees at different times of year and day by Wyczółkowski can be seen in the museum on Mill Island. Meanwhile, nearby, in a spacious building – the so called Red Granary, there is a huge collection of contemporary paintings waiting for the visitors. The collection that has been accumulated for decades, consists of more than 10 thousand works by the most outstanding Polish artists. The District Museum in Bydgoszcz also specializes in Art Nouveau and possesses and interesting collection of that style of work. 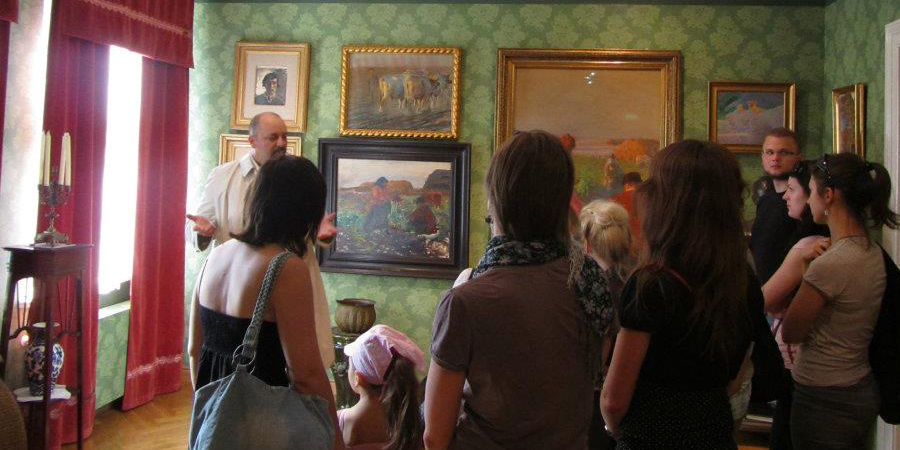 While Mill Island may well be defined as Museum Island – it is the heart of Bydgoszcz, that is Gdańska Street, that is a symbol of contemporary art presented by the Municipal Gallery ”bwa”. The gallery was founded in 1949 as the Artistic Exhibitions Bureau. It was designed to popularise the achievements of artists from both Bydgoszcz and Torun. As time passed ”bwa” in Bydgoszcz became a window on the world when it came to bringing contemporary art to our city. Thanks to ”bwa” we had in Bydgoszcz visits by artists like Magdalena Abakanowicz, Tadeusz Hasior, Jerzy Nowosielski and Jan Cybis. But the real sensation was European painting represented in Bydgoszcz by such names as Pablo Picasso and Salvador Dali. At the same time the spacious halls of the gallery always found a place for representatives of the local artistic community. Nowadays, the Municipal Gallery ”bwa” presents primarily European painting including works from Germany and Holland, but visitors can also expect to meet here art from far parts such as Japan and China. 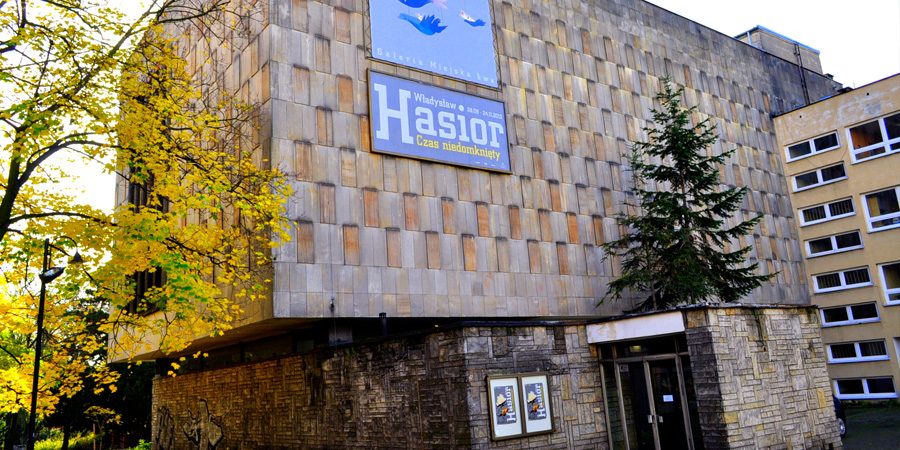 When walking around Bydgoszcz it is worthwhile stopping at the corner of Pomorska and Cieszkowskiego Streets, as there is one of the oldest private galleries in Poland there. The Author's Gallery founded in 1975 by the painter Jan Kaja and graphic artist Jacek Soliński is a real sensation. The place hosts exhibitions of artists from different backgrounds, but also evenings of poetry, literary meetings, performances, concerts, lectures. This little Author's Gallery is a great cultural salon of the city. These are just some of addresses that are worth remembering, since inside they house beautiful tradition and an equally interesting present. There are many more of such places. No doubt an attentive wanderer will find them while walking past Art Nouveau buildings. The physical space between them is also filled with culture, especially in summer. Bydgoszcz Musical Impressions, European Artistic Summer and Street Art Festival – Buskers Festival, have already become permanent events in the city landscape. Thanks to the artists giving their presentation just in front of you the city acquires a unique atmosphere in the summer.

Municipal Centre of Culture is located on Marcinkowski Street in a secession style building from the beginning of the 20th century designed by Fritz Weidner. You can come here to see all kinds of cultural events, concerts and films. Besides this, the Centre takes care of some other venues: the Wspólna Gallery, Concert Stage in W. Witos Park and the Palace in Ostromecko.