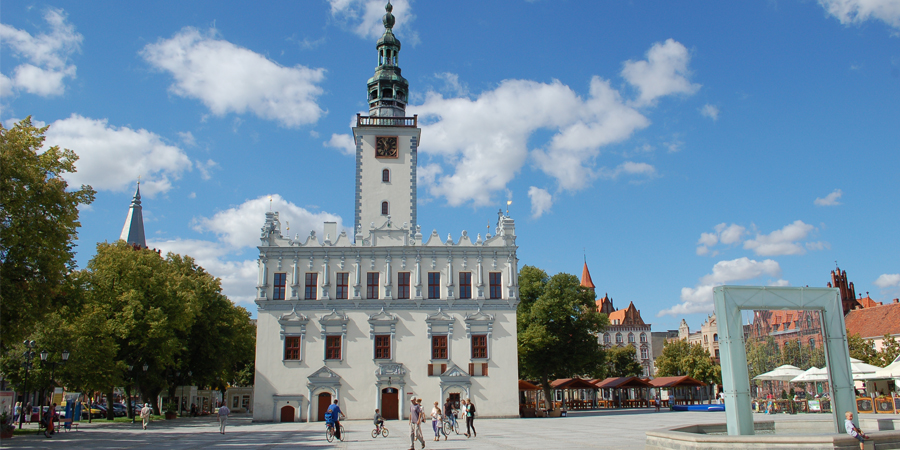 Chełmno is a picturesque town on the River Vistula stretching across nine hills, the capital of the historical Chełmno Land.

The first written record of Chełmno dates from 1065. The town is known for the Chełmno Law (the document contained parts of the Magdeburg, Flemish and Hungarian laws) incorporated by the Teutonic Order in 1233. Until the 18th century, Chełmno served as a legal and architectural model for chartering 225 towns (such as Warsaw, Gdańsk, Toruń, and Wadowice, to name but a few) and over 1,364 villages and settlements. Chełmno, thanks to the medieval walls and historic sites, is called the “Polish Carcassonne” or the “Little Krakow”. In addition, the great value of the historical old town of Chełmno can be confirmed by its registration on the List of Heritage Landmarks of the Presidents of Poland in 2005.

The biggest attractions of Chełmno are its historic sites dating from its heyday (13th-14th centuries). The town features a preserved, chessboard layout of medieval streets and 2,270 m long gothic city walls, serving as the most outstanding examples of defensive architecture in Europe. The heart of the town is its market square, the centre of which is occupied by the “gem of Pomerania’s Renaissance architecture” – the gothic-renaissance Town Hall. It has the model of a medieval unit of measure, known as the “Chełmno Bar”, 4.35 m long, seen on one of the walls of the Town Hall. These days, it houses the Museum of Chełmno Land.

Chełmno, which is one of the cities of the European Route of Brick Gothic (www.eurob.org), features an old Cistercian-Benedictine monastery and as many as six gothic churches. One of them is the Fara Church of the Assumption of the Blessed Virgin Mary, which has the relics of St Valentine. On the Feast of St Valentine, celebrated on February 14, the town hosts Valentine’s Day of Chełmno. Due to this reason, Chełmno is called the City of Lovers and the City of Love. Every year in February, the town attracts lovers, offering to them such local delicacies as lovage buns.

Visiting the Chełmno churches, we recommend climbing the 60-metre high tower of the Fara Church (Franciszkańska Street); visiting the crypt of Benedictine prioress Magdalena Mortęska (1554-1631) in the local convent (40 Dominikańska Street) as well as the treasury and monastery cellars. The Church of the Holy Spirit (Toruńska Street) has a wide variety of knights’ armour.