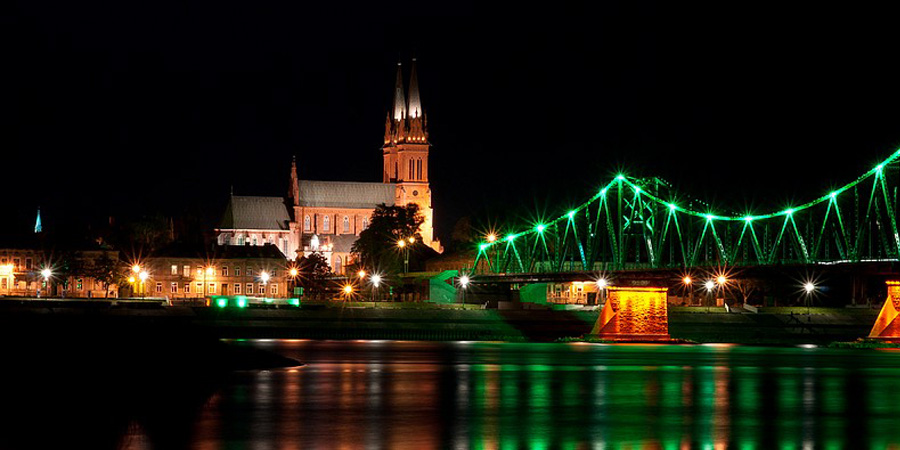 In the south-eastern part of Kujawsko-Pomorskie Voivodeship, on the River Vistula, we find Włocławek, a city that in the past was called the “capital of Kuyavia”, one of the oldest towns in Poland.

During the early years of the reign of the Piast dynasty, the city, which was founded by Duke Vladislav at the outlet of the River Zgłowiączka to the Vistula, was regarded as one of the gathering sites of the Polish army of the greatest strategic importance. The main trade waterway ran through the area. In 1123, Włocławek became a bishopric. The city is associated with the famous faience factories, which operated from the 19th century. Some of the historic landmarks of Włocławek that are worth visiting include the Cathedral Basilica (7 Kopernika Street) dating from the 14th and 15th centuries, the monastery of the Order of the Reformati in Wolności Square, and the Bishop’s Palace (2 Gdańska Street). One of the most important places associated with Włocławek is the local dam, which also reminds one of a sad story. Here, Father Jerzy Popiełuszko died a martyr’s death in the river.

Water enthusiasts will be charmed by the beautiful Włocławek Reservoir, which is an attractive place for playing water sports, fishing, hiking, biking, mushroom hunting, horseback riding, and other outdoor activities. The Włocławek stretch of the reservoir is one of the most picturesque sites. Its natural course is enjoyed by yachtsmen, sailboaters, and windsurfers. The Włocławek Reservoir hosts boat races, which are a perfect opportunity for sporting competitions. Travelling on the local waterways, in the area of the city, we can notice that Włocławek is a very green city. It is surrounded by woods, scarps of the Kulin Reserve, and big-city chimneys, in which migrating falcons live. Tourists are charmed by the greenery of the historical Henryk Sienkiewicz Municipal Park and beautiful flower beds.

The city bordersthe Gostynin-Włocławek Landscape Park and a host of lakes, including Lake Rakutowskie, recognized as a European waterfowl sanctuary.