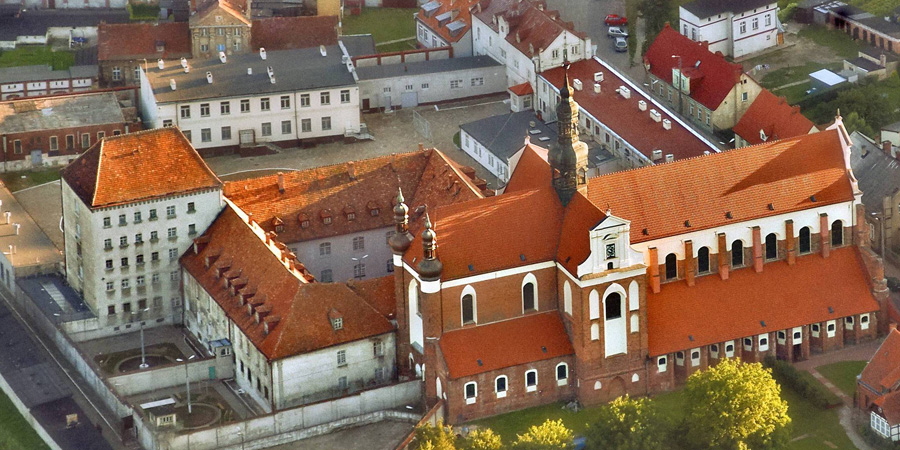 Koronowo is a town with a deep-rooted and rich history, situated in a picturesque valley of the River Brda, 25 km north of Bydgoszcz.Its defensive features as well as economic potential was noticed by the Cistercians.

Frequent raids of the Teutonic Knights on their original seat in Byszewo forced the friars to move their monastery to a safer place, which is today’s Koronowo.
In 1368, King Casimir the Great chartered in Kruszwica the local settlement as a town. The name Koronowo dates back to the first half of the 15th century and derives from the name of the monastery, which was called Corona Marie by the friars.

Koronowo is known for its historic landmarks. The most prominent of them is the old Cistercian monastery, which now houses a prison. The old monastery church (initially a collegiate church, and presently a basilica minor) is an example of early gothic monumental architecture (25 Bydgoska Street). At the turn of the 18th century its interior was rebuilt in the Baroque style. New furnishings and high quality artworks were added as well.

Other historic sites that are worth visiting include St Andrew’s Church dating from the late 16th century (Farna Street), the Town Hall built in the first half of the 19th century (1 Zwycięstwa Square), an old synagogue (Szkolna Street), the Jewish cemetery (Kolejowa Street), and a watermill dating from the mid-19th century (Nakielska Street). Re-enactment of the 1410 Battle of Koronowo is organized every year between the end of July and the beginning of August.
The famous painter and graphic artist Leon Wyczółkowski (1852-1936) lived and worked in Gościeradz, a village near Koronowo. The artist and his wife are buried in a rural cemetery of Wtelno, which is located 10 km away from Koronowo.

In 1956-1961, the Koronowo Reservoir was established, which is popular among tourists who come here for sailing, kayaking and other attractions. The area is a paradise for waterfowl such as ducks, common moorhens, swans, harriers, great crested grebes, cranes, grey herons, falcons, and white-tailed eagles. The entire reservoir is surrounded by coniferous woods. In the autumn, the forests around the reservoir attract throngs of mushroom hunters.