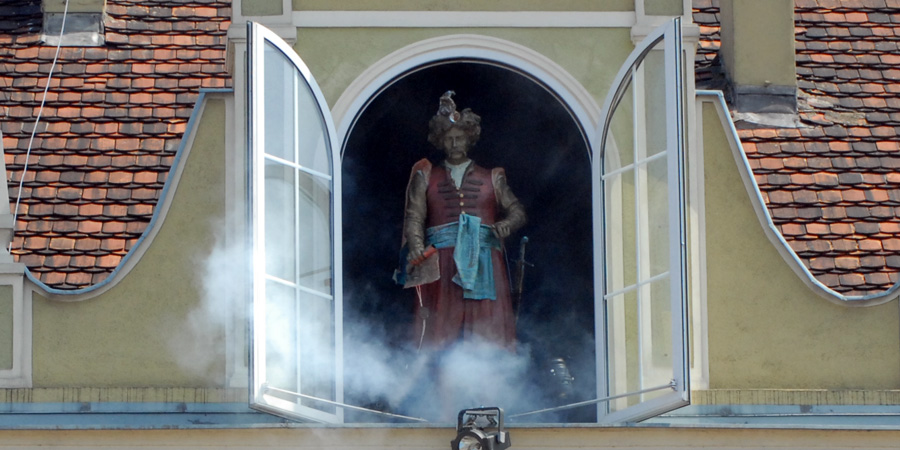 The sorcecer’s stay in our city was narrated by Józef Ignacy Krasicki in his novel „Mistrz Twardowski” (eng. Master Twardowski) published in 1840.

The novel includes a splendid description of Twardowski’s arrival at the city, mounting a rooster (other tales say he got to the old market on a chair). Once in Bydgoszcz, Master headed to Zgorzelec Inn, where he came to live along with his servant Maciek and two little fiends – Smołka and Węgliszek.  That is where he admitted those seeking his help. When rumour started spreading all around the city that Master is adept at magic which saved many unfortunates, there wasn’t a nobleman or other man of means who didn’t seek his counsel. One of the visitors was the mayor, who was already very old, yet married to a young woman. As the poor man could never keep up with his wife, he asked Twardowski to make him younger again.  Master, with the aid of his minions, concocted a potion from magical herbs and bathed the old man in it. After a few hours, the mayor left the cauldron utterly rejuvenated. Unfortunately, upon his return home, none of his servants, nor even his wife were able to recognise the man.
Everyday at 1.13 p.m. and 9.13p.m. Master Twardowski leans out of the window of a tenement at Stary Rynek 15 (old market) to greet whoever is present. It is the exact same place where he used to do his magic.