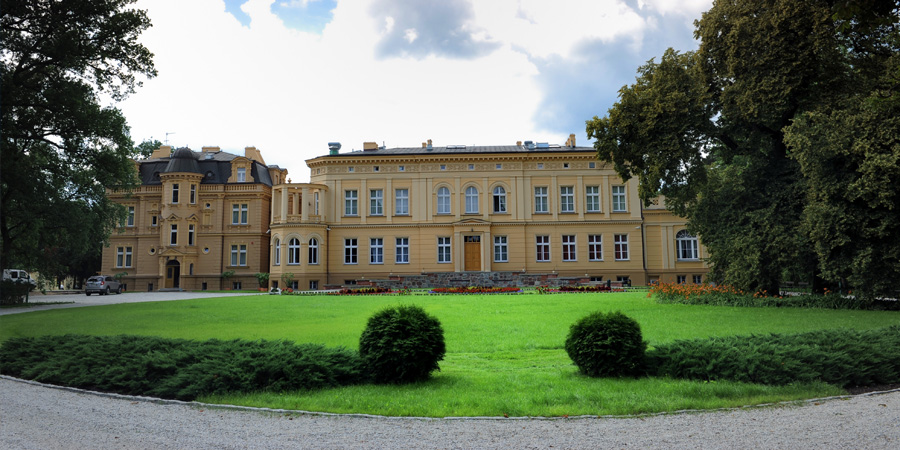 About 17 km from the city centre of Bydgoszcz, towards Dąbrowa Chełmińska, is the Ostromecko Palace and Park (9 Bydgoska Street).

The New Palace was erected in the classicist style in 1832-1849 (to the design of Karl Friedrich Schinkel’s studio), commissioned by the then owner of Ostromecko, Jakub Martin Schoenborn. The main building is joined from the south by a neo-baroque annex, featuring the Hunting Palace (1891-1892), and from the north – by the Ballroom added in 1905. These days, the building houses a restaurant with a hotel. In the west, the Palace is adjoined by vast terraces (ca. 1912), heading straight to a 19th-century garden, designed in the English style by garden architect Peter Joseph Lenné. Now we head towards the Old Palace, which is located far in the garden. The present structure dates from the mid-18th century, when the previous nobleman’s manor house was expanded by the Mostowski family. The palace, built in the Warsaw rococo style, features a collection of 18th- and 19th-century pianos collected by a distinguished citizen of Bydgoszcz, Andrzej Szwalbe, whose memorial chamber is in the building. The windows of the palace and the terrace outside the building offer a picturesque view of the Italian garden stretching below, as well as the Vistula and its old riverbed.

Did you know that …
The legend of the golden jaw dates back to the origins of Ostromecko, when the local estate was the property of a knight. A horse saved the life of one of the owners of Ostromecko during a battle. Unfortunately, the animal’s jaw was injured during this fight. The injury was serious enough to make eating impossible. This time, the knight saved his beloved horse by getting him a golden jaw. After its death, the animal was buried on the site that is presently occupied by the park. To this day, no one has been able to find the place in which the owner buried his brave companion with its golden jaw.

The south-western part of the palace park features the mausoleum of the Schoenborn-Alvensleben family, the owners of Ostromecko for many years. The Palace and Park, administered by the city of Bydgoszcz, is an important cultural and entertainment centre of the city and the entire region of Kujawsko-Pomorskie Voivodeship. The Municipal Centre for Culture in Bydgoszcz organizes numerous vernissages, exhibitions and music concerts in the palace.

Did you know that …
In 1894, William II, Emperor of Germany arrived at Ostromecko on the occasion of the opening of the Fordon Bridge. During that time, the Emperor was a guest of Albrecht Alvensleben (1840-1928), the owner of the local estate. The history of Albrecht’s descendants is very unique. His eldest son, Joachim Martin (1887-1967), the heir of Ostromecko of many years, accepted the new Polish authorities after the First World War and maintained very friendly relations with the Poles. He initiated construction of the “Freedom Monument” in Ostromecko commemorating the 10th anniversary of Poland regaining independence. During the Second World War, he spent several years in concentration camps, where he was sent at the request of his elder son Albrecht Werner, member of SS and Selbstschutz, responsible for the death of many Poles. Joachim’s younger son Ludolf, called Lulu, was well liked and formed a nice chapter in the history of Ostromecko.

In the immediate proximity to the Ostromecko Palace and Park, is the Parish Church of St. Nicholas, Stanislaus and John the Baptist. The place of worship was built in the gothic style in 1630. The church tower dates from 1764, when it was rebuilt by the then owner of Ostromecko, Governor of Pomerania, Paweł Mostowski (his initials are seen on the flag of the church spire). The baroque interior features a gothic statue of St Mary and Child, and a Pieta. In addition, Ostromecko has many other interesting sites that date from the period when the estate was the property of the Alvensleben family, including buildings of an old post office, hospital, stagecoach trading post, a railway station dating from the late 19th century, and a brickyard (these days, the premises of the old brickyard are occupied by the Mineral Water Production Plant). The first information about the Ostromecko water dates from the 16th century. Extraction of mineral water from the local spring began in 1894. Until the outbreak of the First World War, the water from the Maria Spring was called Marien-Quelle. During the Second World War, the water from Ostromecko, produced for the needs of the Wehrmacht, was sent to, among other places, Africa, where the Germans fought fierce battles with the British.