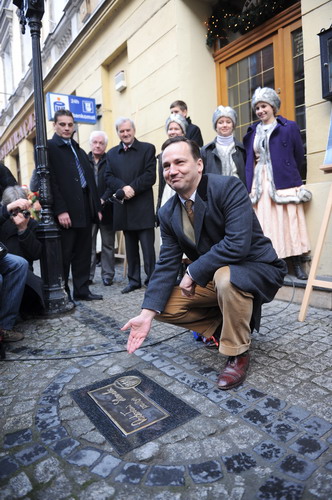 Radosław Tomasz Sikorski (born 23 February 1963 in Bydgoszcz), is a Polish politician and journalist. Currently he is the Minister of Foreign Affairs of the Republic of Poland. Sikorski was involved in the Solidarity social movement in the late 1970s, and chaired the student strike committee in Bydgoszcz in March 1981.

After martial law was declared in December 1981, he fled to the United Kingdom whose government granted him asylum the following year. He studied Philosophy, Politics and Economics at Pembroke College, University of Oxford; while there, he joined the all-male drinking club The Bullingdon Club. Other members then included the current British Prime Minister David Cameron and the current Mayor of London Boris Johnson, who destroyed his room in a bizarre initiation ceremony. He then worked as a freelance journalist. In 1984, he took British citizenship. In the mid-1980s, Sikorski worked as a war correspondent in Afghanistan and Angola. For a photograph taken in Afghanistan he won the World Press Photo prize in 1987.From 1990 he was an advisor to Rupert Murdoch on investments in Poland. Sikorski returned to Poland in 1992. He briefly became deputy defence minister in the Jan Olszewski government. From 1998 to 2001 he served as deputy minister of foreign affairs in the Jerzy Buzek government. During the latter appointment, Sikorski became notorious in the Polish expatriate community for designing and promoting a particularly strict policy regarding the status of Polonia's citizenship in Poland. As a result of that policy, Poland refused to recognize the acquired citizenships of Polish emigrants, including hundreds of thousands of recent refugees from Communism and their children, and insisted that they be subject to all obligations of Polish citizenship, while at the same time making it impossible to renounce such citizenship because of an extremely cumbersome administrative procedure. This policy became known as the "passport trap" because it was mainly implemented as harassment of departing travellers (primarily citizens of the United States, Canada, and Australia) who were prevented from leaving Poland until they obtained a Polish passport.

From 2002 to 2005 he was a resident fellow of the American Enterprise Institute in Washington, D.C. and executive director of the New Atlantic Initiative. He returned to government in Poland as Minister of National Defence in 2005. He resigned on February 5, 2007 allegedly due to conflicts with Prime Minister Jaroslaw Kaczynski and the chief of military intelligence Antoni Macierewicz.

He left the Law and Justice parliamentary club on September 12, 2007 and joined the main opposition Civic Platform party as its main candidate to the Sejm in the 2007 parliamentary election from Bydgoszcz. Following the election, he became Minister of Foreign Affairs under Prime Minister Donald Tusk.

He is married to American journalist and historian Anne Applebaum. They have two children, Aleksander and Tadeusz. Sikorski owns a manor in Chobielin. During his stay in Britain, Sikorski dated actress Olivia Williams for three years.

Sikorski is a strong supporter of a decentralized state, a free market economy, and social conservatism. He is a pro-American politician, believing that that cooperation between the two countries can lead to the modernization of Poland's military. On August 20, 2008, Sikorski, the government's point man on missile defense, signed a missile defense agreement with U.S. Secretary of State Condoleezza Rice over the objections of Russia. The agreement came less than two weeks after the breakout of the 2008 South Ossetian war in Georgia."Parchments and treaties are all very well," Sikorski said, "but we have a history in Poland of fighting alone and being left to our own devices by our allies."

In 1990, Sikorski published a book about the Soviet-Afghan War entitled Prochy świętych ("Dust of the Saints"). In 2007, Polish journalist Łukasz Warzecha published an interview with Sikorski in book form entitled Strefa zdekomunizowana ("The Decommunized zone").

Shortly after the 2008 U.S. presidential election, opposition politician Ryszard Czarnecki alleged that Sikorski had repeated a joke suggesting that President-elect Barack Obama's grandfather was a cannibal who had eaten a Polish missionary. A spokesman for the Polish foreign office denied it, explaining that Sikorski "was only giving an example of the unpalatable and racist 'jokes' that surround President-elect Obama". His wife Anne Applebaum had declared her intent to vote for Obama.

The press published speculations that Sikorski could be a strong contender for the post of the secretary general of NATO, held by Jaap de Hoop Scheffer until July 2009. In the event, NATO named Prime Minister of Denmark Anders Fogh Rasmussen, despite previous Turkish objections.

show all
do góry
Newsletter