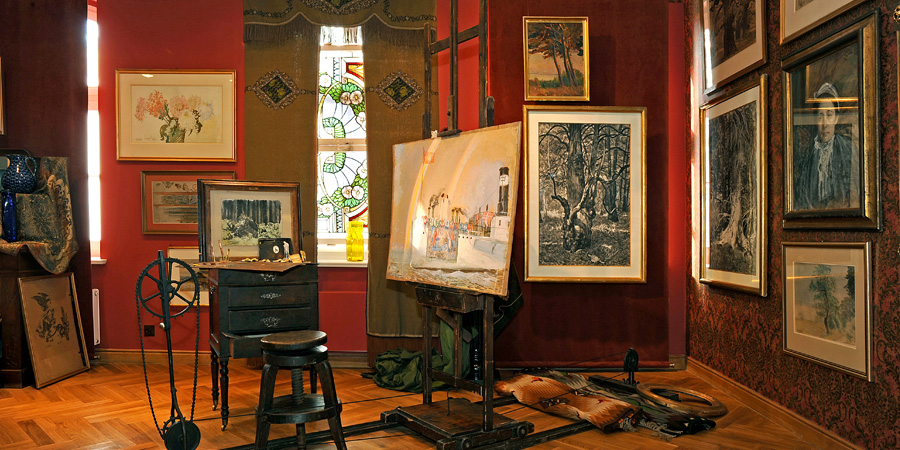 The Bydgoszcz museum owns one of the largest collections of Leon Wyczółkowski’s paintings, drawings and graphics in Poland. The collection is complimented with numerous documents, a rich photographic archive, personal souvenirs, artistic workshop and other original items from his mansion in Gościeradz.

The works of this outstanding artist are presented in a chronological and thematic structure. The exhibition area takes up four rooms in an en suite arrangement. It has been divided into two parts: the first presents the artist’s works and souvenirs in the living room arrangement, the other shows the possible interiors of the artist’s painting and graphic studios.The additionally incorporated items from the Department of History and Artistic Crafts help to evoke the mood of that period.

From the hall on the ground floor decorated with spiral baroque columns that were depicted in several Wyczółkowski’s paintings, we move on to the “blue” salon, named after the colour of the wallpaper and portieres at the windows. The interior, besides being arranged as a painting gallery, is filled with furniture that once belonged to the artist, e.g. the eclectic 19th c. set: a table, couch and chairs.

Most of the displayed works in that salon are portraits: presenting the entire silhouettes, busts, sitting persons, sometimes in casual poses. The artist painted his own portraits, the portraits of his friends, professors, artists as well as the portraits of less known persons. He created many of them. They are compositionally perfect, full of colour and light, and represent the psyche and mood of those portrayed. The gallery is opened – starting from the right – with the Portrait of Dr Mieczysław Michałowicz, 1902 and the double Portrait of Julian and Jan Dobrzańscy, from 1879-1880, a very early work painted by the artist in Lvov, presumably as one of his first individual works, devoid of Jan Matejko’s impact. Next, we encounter the charming Portrait of a woman from 1883. On the wall opposite the entrance we find two outstanding works of the painter, Portrait of Zofia Cybulska, 1903 and the Portrait of Tadeusz Żuk-Skarszewski, 1904. Moreover, in the “blue” room we find two portraits of the artist’s friends and artists: Antoni Kurzawa and Konstanty Laszczka.

Wyczółkowski was also fascinated with architecture, especially the historic architecture of the Polish towns. In 1906 he created a series of oil views of Cracow, including The view from Wawel, 1906. The presentation of this view is twofold, on the one hand we admire the view of Cracow in the sunset, on the other we see it through a blurry window. The other paintings shown in the exhibition include the paintings of flowers, mostly roses, peonies, chrysanthemums, that Wyczółkowski created with great passion in various periods of his artistic activity surrendering to their charm. Often, in such paintings windows served as the background. This form of depiction was used in the painting titled Flowers in the vase, 1909. This is a composition presenting a bouquet of white and red roses in a crystal vase. This is an exceptionally decorative composition, with the freshness and form of flowers obtained with the use of light. 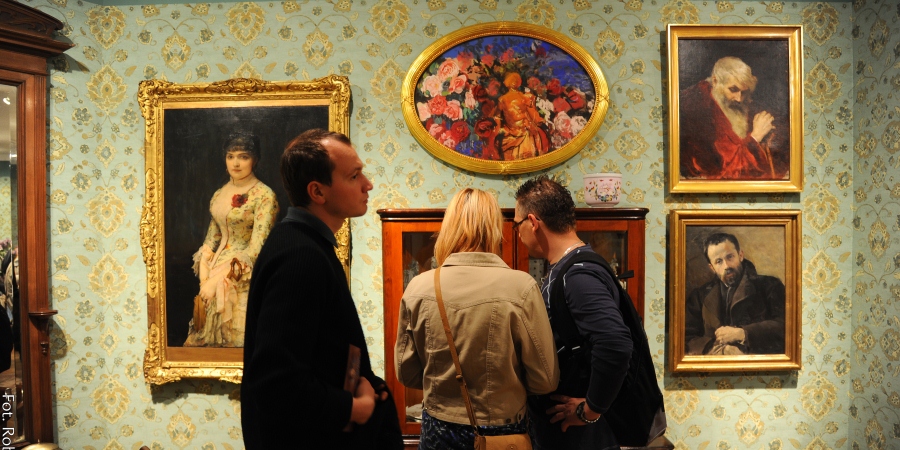 From the “blue” salon we move on to the “green” room also presenting some pieces of furniture, including two tables and a 19th c. armchair belonging to Wyczółkowski. The remaining secessionist cabinets and cupboards come from the Department of History. In this room we also find a sculpture and a vase made by Konstanty Laszczka. The paintings dis played on the walls are grouped thematically. Starting from the entrance on the right side, we see the works from the Ukrainian period, including Beetroot digging, 1903; Oxen – a study, 1891; A peasant’s head, 1890; A burial mound in Ukraine, 1894 or A view from Ukraine, 1912.  Between the windows we see a Self-portrait from 1913. Opposite the windows the views of the Tatra mountains are displayed, the subject of the artist’s numerous works. He created a cycle of pastel mountain landscapes, two of which have been placed in the exhibition. Beside, we find an aquarelle View of the Dębnicki bridge in Cracow from 1914, and, slightly further, the Portrait of Jadwiga Mikołajczykówna (Portrait of Rydlowa) from 1899, a young, 16-year-old girl from Bronowice, the future wife of the poet Lucjan Rydel. On the way out of the “green” salon, on the right side we encounter Chrysanthemums from 1909 and a colourful Pine from 1912.

As we walk towards the first floor, at the staircase we find several photographs from the rich photographic archive of Leon Wyczółkowski. The first floor is taken up by the artist’s working rooms, one of which represents his painting studio, and the other – his graphic studio. Both studios are arranged to provide an exhibition area and to represent the artist’s place of work. In the painting workshop we find the superb oil, pastel and aquarelle works, sketches and the unfinished works from the artist’s various artistic periods. Moreover, the studio is equipped with an original easel on rails, referred to by the artist as “a Gościeradz tram”, a painting cabinet, palette, paints and a sketching table. The interior is completed with oriental fabrics collected by the artist, and exhibits that served him as models for his compositions. Right by the entrance, on the left, nearly the entire wall is covered with various representations of trees. Among them we find the impressive Jagiellonian Oak, 1921-1936 depicted from the bottom in the background of a forest. A little further we find the Alley in the Gościeradz park, 1927; The interior of the Wawel Cathedral, 1911, and Figures on the roof of the Old Town, an aquarelle from 1915, as well as the artist’s favourite Twin pines in a yew grove, 1935; Sunset, 1929; Rogalin Oaks from 1925 and other. In the near proximity we see the Portrait of Erazm Barącz in Spanish armour from 1924, presented in natural size. The painter met the Armenian Barącz family in Lvov, and became friends with Erazm, an expert collector, when he was living in Wieliczka and worked as the head of the salt mine.

In the background of the windows at the end of the discussed wall we see a shiny trunk of an old tremendous Spruce in the sun from 1931 with broadly spread roots and a maze of dry branches accentuated with the rays of sunlight. Wyczółkowski used here chiaroscuro contrasts and scratched out some of the dry branches. The composition plays with the white and black colours. Beside, on the wall opposite the entrance, we see a painting portraying an equally gigantic Yew from the reserve in Wierzchlas, 1930. On the easel placed in this part of the exhibition, we find one of the series of paintings presenting the “Mickiewicz” Ship, carrying the urn with the ashes of Juliusz Słowacki, 1927. It should be mentioned that Wyczółkowski designed the decoration related with the funeral ceremony in Barbican, preceding the placing of Słowacki’s ashes on Wawel.

Vis-à-vis the entrance we come across the aquarelle Roofs of the old Warsaw, 1919; The tombstone of Sigismund II Augustus, ca. 1920; Portraits of Helena, 1911 and Konstanty Laszczka, 1921; a panoramic view of Toruń, 1928 with the dominating silhouette of a red gothic church of St. John, and floral presentations. At the wall to the right from the entrance we find another easel with the painting of The Sigismund’s Chapel in Winter, 1908. What draws our attention on the wall behind the easel is a panoramic mountain view, A view from Koziniec from 1905, and A wooden church, 1910, a sketchy Girl picking berries (?) and a series of three paintings with floral motives.

In Wyczółkowski’s graphic studio we find a display of his works and tools: a lithographic press, lithographic stones and aluminium plates. As we know, the artist experimented with various graphic techniques, from aquatint, through fluorofort, algraphics, soft varnish, stone engraving, to lithography – his favourite technique. The exhibited works have been grouped according to particular techniques. The descriptions of techniques have been placed on the walls, next to exemplary works.

As we go from the painting to the graphic studio, on the left side from the entrance we find the examples of algraphics from Lithuanian and Ukrainian portfolios, and farther, we come across two prints made in the technique of fluorofort. The artist was especially interested in that technique in the years 1903-1905. The exhibition is closed with stone engraving works including Still nature from 1921 and Cineraria in a vase from 1922.