The exhibition is of a historical character, since it covers nearly a century of the mint’s existence. The opening of the exhibition took place on 12 June 2010, and was combined with the celebration of the Bydgoszcz Museum Night. In the first exhibition room we find the spatial arrangement of the Mill Island with the indicated buildings of the mint, the process of coin production illustrated with the illuminated reproductions of stained-glass windows from the mint in Konstanz (stained-glass illusions), selected prints from Georgius Agricola’s work De re metallica and the Encyclopédie by Denis Diderot and Jean le Rond d’Alembert. 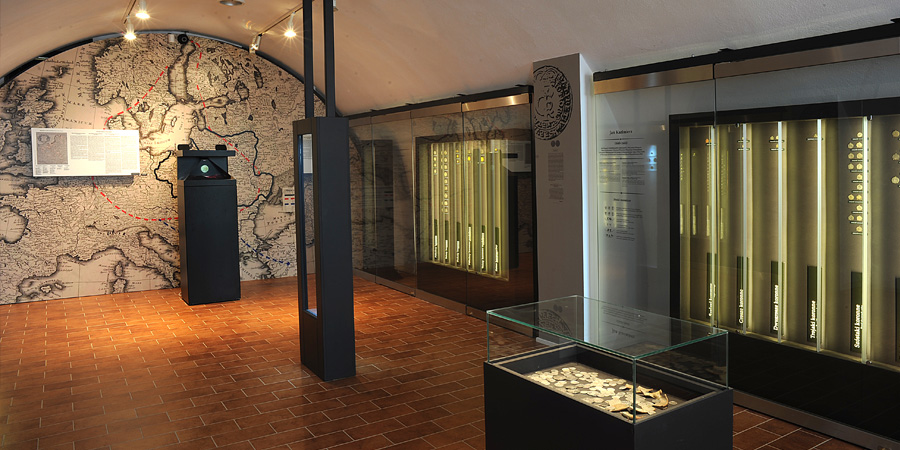 The exhibition also presents such items as blacksmith’s tools allowing the visitors to become familiarized with the tools used in the Bydgoszcz mint, as well as other objects, such as: crucibles, mint stamps, scales, and a case – treasure box, and the items representing material culture (pipes, shoes, jugs and stove tiles) found in the course of excavation works conducted in the area of the former mint by the Regional Institution for Protection of Cultural Historic Monuments in Toruń, Department in Bydgoszcz in the years 1993-1994 and 2006-2009. What will undoubtedly arouse interest among the visitors, is the model of a stylised mint screw used for producing thick coins: thalers and semi-thalers.

In the other room of the basement we find the exhibition of coins grouped according to their type in a chronological order, produced during the reigns of the kings: Sigismund III Vasa, Władysław IV, John Casimir, Micheal Korybut Wiśniowiecki and John III Sobieski, and borrowed from prestigious Polish numismatic collections of the National Museum in Warsaw, the National Bank of Poland, the Ossolineum in Wrocław, the District Museum in Toruń, the District Museum in Konin and the Castle Museum in Malbork.

Apart from small denomination coins such as shillings and triplexes, the mint in Bydgoszcz also produced such high value coins as ducats and their multiples, as well as thalers and semi-thalers. From Bydgoszcz comes the famous golden one-hundred-ducat coin from 1621 of 350 g, believed to be one of the most beautiful European coins. The coin is presented at the exhibition with the use of a modern 3D technique. A multimedia presentation was used to show 30 other selected coins of particular importance for the Bydgoszcz mint. Another interesting exhibit is a register of Polish wages and prices from the turn of the 16th and 17th c.

The coins from the Bydgoszcz mint reached many remote parts of Europe. They were encountered in Hungary, Moldova, and in the other Balkan areas (Turkey), as well as in Scandinavia and the German Reich. They are retrieved as both single finds and as treasures, the example of which is the presentation of the treasure from Osówiec near Mogilno shown at the exhibition.