Bydgoszcz – the pieces of the city 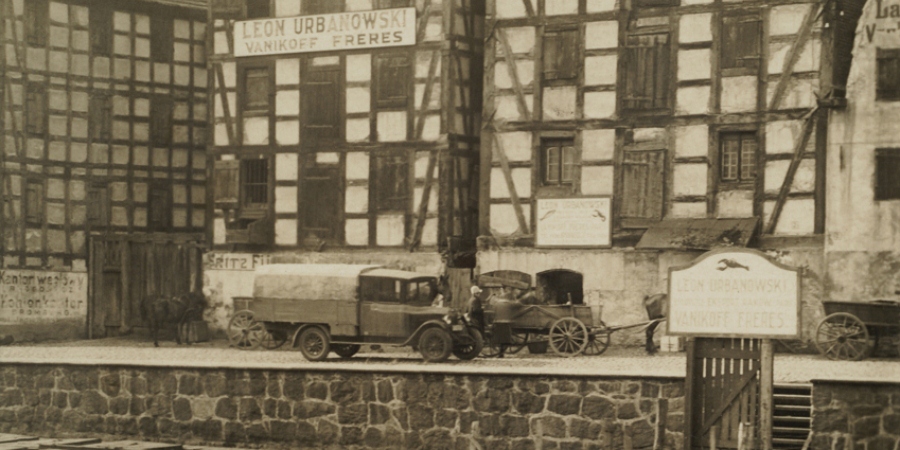 The photography exhibition “Bydgoszcz – the pieces of the city” is presented in granaries at Grodzka Street. It takes viewers back to the times very distant from modern era. Inventing of photography, that took place in the 19th c., at the beginning of the technical and civilizational revolution, turned out to be as significant as inventing of the steam engine. Here, the man received a tool allowing him to stop the time. The reality that existed objectively at one moment could be preserved and shown to the next generations.

Of course, before that time, this function was served by paintings; however, it was only meant for the chosen ones. At the beginning, photography was only available for those initiated; however, the technical progress in this field was extremely fast. New techniques, new photosensitive materials and, constantly improved camera constructions emerged. Starting from the 1860’s, it became common to pay visits to a photographer’s studio to document the important moments in people’s lives, or to take portrait photos, taking also the form of calling cards. This form of photography started to gradually disappear in the 20th c. due to technical progress. Cameras were becoming smaller and improved. The new photosensitive materials allowed taking photos with faint light and of moving shapes. At the same time, costs were systematically decreasing, which was probably the most important factor. Due to that, more and more people could afford buying cameras, and began to take photos on their own. This was also the time when photographic studios introduced the service of processing the exposed photographic materials and making copies.

This whole process significantly influenced the appearance of the photos themselves. They became less serious and dignified, and started to be more casual. That was also the moment when photo essays emerged – the possibility of documenting events with a series of photographs. However, the photo as an object started to lose its value. Magnificent photographic albums were becoming a thing of the past. Paper copies, at first with serrated sides, were, on the other hand, becoming more and more common. Photos were put into albums by using special corners, and later were simply glued to the pages.

The history of photography development together with the accompanying atmosphere can be traced, in a micro scale, on the example of Bydgoszcz, where, already in the mid 1850’s, first daguerreotype studios appeared, managed, at times, by painters. Thanks to work of those people, professional photographers, the picture of the city at the turn of the 19th and 20th c. was preserved. This is what we read in a German study from 1907, titled Industrie und Gewerbe in Bromberg: “Photography is an extremely active and expansive craft in the domain of art and technology. We know of its extraordinary usefulness in nearly all professions, in arts and science. Due to the fact that many works are done in an artistic way, the owners of the ten atelier in the city are well-thought-of even outside the city borders and have a vast clientele”.

The further we enter the 20th c., the more we deal with the so-called amateur photography. It has the undeniable advantage of presenting the city from a more private perspective. However, if we take a look at many earlier photographs, we will notice that they include accidental elements that are not a part of the main theme, but, at the same time, are very interesting. This very aspect became the reason for the preparation of an exhibition, and then of an album of the same title: Bydgoszcz – the pieces of the city.

The idea to create such a presentation came into being in the course of the author’s work of many years on the photographs of Bydgoszcz, and is the result of his use of a magnifying glass. Only watching photographs in such a way reveals their secrets, beauty and truth. A take that at first sight often seems banal, while magnified can show a fascinating fragment. This very method was used while preparing the material for the exhibition. Both the selection of works and the kind of framing, result from the author’s subjective preferences. They are elements of the known and published photographs that were turned into new ones, showing what is ephemeral in the city, its events, atmosphere, anecdotes. So far, the hero of the exhibitions and albums of photography prepared by the Leon Wyczółkowski District Museum, was Bydgoszcz. This time is different. The city provides the background for the people and events. Author’s intention was to present something transitory, impressions from the city life; hence the word “pieces” in the title. People depicted in the photos were not the photographer’s goal, that is why their behaviour is natural.

The presented scenes have been preserved over 100 years, for the earliest photograph comes from 1862, and the latest from ca. 1970. The exhi bition gives us the opportunity to watch the people of Bydgoszcz, and see it as a record of the past. It also allows us to admire the fact that in a more or less distant past this is how the reality of today’s city was created.