Modern Art Gallery presents selected and most representatives works from the collections of the Bydgoszcz museum. The gallery comprises of 200 paintings, photographs, sculptures, objects and installations, selected from the collection of nearly thirteen thousand items of artistic realizations of the 20th c. The exhibition is of a chronological–thematic structure: it shortly presents particular artistic trends and tendencies in the Polish art of the last one hundred years, and, at the same time, it introduces various artistic centres of Poland. 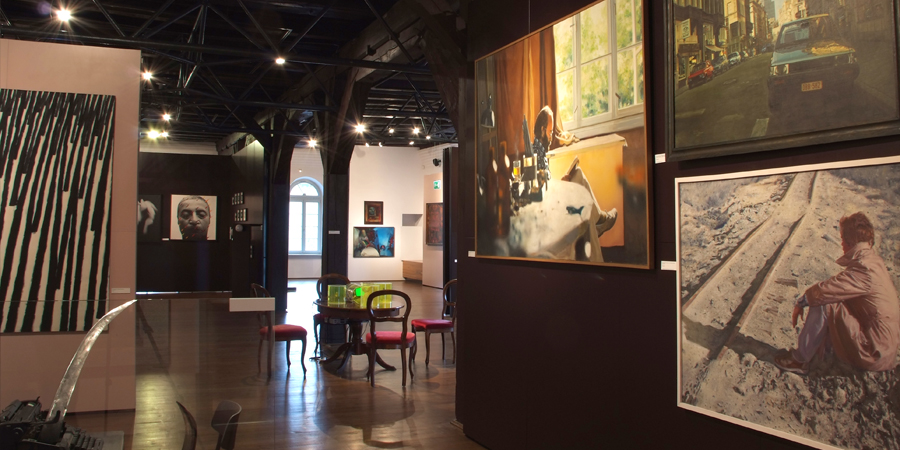 While documenting the activity of artists related with Bydgoszcz and its region, the museum managed to gather a vast collection of their works; the exhibition also aims to indicate the contribution of particular artists in the general Polish artistic life.

The end of the 19th c. introduced to the art theory a new artistic posture. The deepened reflection on the works’ forms and contents, combined with experimental use of new techniques had an impact on the development of modern art. The concepts of impressionism or symbolism that emerged at that time, are signalled with the works of Olga Boznańska, Józef Pankiewicz, Jacek Malczewski, Jana Stanisławski and Leon Wyczółkowski.

The interwar period is characterised by pluralism of artistic concepts worked out by the newly established artistic groups assembling artists of similar aesthetic views. The avant-garde manifestos of the West-European art were combined with the artists’ own artistic experiments. The exhibition presents the works of the representatives of the most distinguishing artistic groups, including: “Polish Expressionists” (Leon Chwistek, Tytus Czyżewski, Tymon Niesiołowski, Wacław Wąsowicz, Stanisław Ignacy Witkiewicz, Romuald Kamil Witkowski), “Rhythm” (Wacław Borowski, Ludomir Sleńdziński, Zofia Stryjeńska), “St. Luke’s Fraternity” (Bolesław Cybis). The exhibition also emphasizes the contribution of Polish artists in the development of the international artistic environment of Paris (“École de Paris”) and the European art of the first half of the 20th c. – Tadeusz Makowski, Mela Muter, Jan Rubczak and Eugeniusz Zak.

One of the most important artistic tendencies in the Polish painting of the 20th c. is colourism. The issue of colour intrigued the artists assem bled in such artistic associations as “Unicorn”, “Prism” or “Keystone”, with which Emil Krcha and Zbigniew Pronaszko were related. However, the artists that had the largest influence on the development of colourism were the artists of “Parisian Committee”, including Jan Cybis, Hanna Rudzka-Cybisowa, Józef Czapski, Artur Nacht-Samborski, Piotr Potworowski. They would transplant the ideas of colourist discipline into the Polish environment, more and more often withdrawing from figuration. After 1945, colourists took over most of the faculties in the Polish artistic academies, passing their experiences on to the next generations of artists.

The young generation of artists of the period following the war, was critical about the colourism aesthetics that was more and more often identified with academism. Artists were searching for new means of expression and demanded the involvement of art in the current affairs and social-political changes. At the same time, particular Polish artistic environments began to emerge. The exhibition portrays the activity of the key Polish art centres.

In Cracow, the group that was particularly distinguishable was “The Group of Young Artists” formed already in the 1940’s, later transformed into “The II Cracovian Group” – the continuator of traditions of the prewar group; the artists belonging to the group included Maria Jarema, Tadeusz Kantor, Kazimierz Mikulski, Jerzy Nowosielski, Erna Rosenstein and Jonasz Stern. The “modern” artists were looking for a contemporary artistic language – a means of communication combining the tradition worked out by constructivists with the elements of surrealism and metaphor. The city of Cracow also played the host to The First Exhibition of Modern Arts (December 1948 – January 1949) presenting the works of Marek Włodarski, Andrzej Wróblewski and Henryk Stażewski. The exhibition was the last review of free art before the imposition of the socialist realism as the only right artistic method in 1949.

In 1947, in Warsaw, at the initiative of Marian Bogusz, “The Club of Young Artists and Researchers” began its activity. The goals set by the artists assembled in the club (such as Maria Ewa Łunkiewicz-Rogoyska, Kajetan Sosnowski) emphasised the necessity of voicing an objection towards socialist realism and colourism, as well as the need for conducting formal experiments with a concurrent aim of creating art reacting to social and political changes in Poland. A unique event was The All- Polish Exhibition of Young Artists Against War – Agaist Fascism held at the Arsenal in 1955, organized within the World Festival of Youth and Students. The exhibition came to be known as the first manifestation of rebellion against the imposed socialist realism doctrine, and proved to be one of the first signs of the “thaw”. Bold deformations, brutal realism, expression and synthesis of the presented works in combination with the existential problematique became a breakthrough phenomenon in the Polish post-war art. The artists participating in the Arsenal included Stefan Gierowski, Jacek Sienicki and Barbara Jonscher, whose Don Kichot was a manifestation of a reborn moral posture. The “Arsenalists” met with a certain disapproval of “Group 55”, a continuator of the thought of Marian Bogusz, Zbigniew Dłubak and Kajetan Sosnowski, since the artists gathered around the “Uneven Circle Gallery” popularizing the most prominent achievements of modern art, aimed, first of all, at the perfection of the language of artistic metaphor.

The artistic environment of Tricity was enlivened with the activity of the so-called Sopot school, with its key artists: Juliusz Studnicki, Krystyna Łada-Studnicka, Kazimierz Śramkiewicz, Józefa Wnukowa and Jacek Żuławski. The Gdańsk sculpture is represented at the exhibition with the works of Stanisław Horno-Popławski, an author of poetic works, mostly realized in stone. The artist related with the Coast and with Poznań, was Stanisław Teisseyre; Wrocław is represented by Eugeniusz Geppert.

Since late 1950’s, a tendency visible among the artists involved taking up the issues of widely understood expressive abstraction accentuating the values of colour and matter. The works presented at the exhibition, based on the texturality of compositions and collage, allow to appreciate the richness of artistic values and concepts of particular authors: Alfred Lenica, Erna Rosenstein, Tadeusz Brzozowski, Jerzy Tchórzewski, Tadeusz Kantor and Jonasz Stern. The language of calligraphic signs, saturated with elements of symbolism is present in the works of Stanisław Fijałkowski, Teresa Tyszkiewicz and Jan Tarasin. A special place in the collection is taken by the artists presenting the painting of the matter: Tadeusz Kantor, Aleksander Kobzdej, Jadwiga Maziarska, Wanda Paklikowska-Winnicka, Teresa Rudowicz, Zbigniew Tymoszewski and Danuta and Witold Urbanowicz.

Abstraction also is the starting point for considerations purely concerned with painting and the relations between colour, light and space. Such a view was present in the works of Aleksandra Jachtoma and Janusz Eysymont, artists making their debuts in the 1960’s in the Warsaw group “Reconnaissance”. Similar beliefs are followed by Stefan Gierowski, whose artistic route is presented by an auteur collection of his works of the Bydgoszcz museum.

A large group of works of the Gallery are the works of artists using the language of geometric abstraction. This trend, referring to the accomplishments of constructivism of the 1920’s and 1930’s, resulted from the need for expressing universal truths: common ideas, concepts not related to any visual reality, naming of which was difficult or even impossible. This posture is often accompanied with a conceptual reflection – since the method, the system of constructing a painting, and the arrangement of geometric forms according to a specified code are equally important. The examples of following of such an artistic thought are the works of Henryk Stażewski, Jerzy Grabowski, Jerzy Kałucki, Jerzy Rosołowicz, Jan Pamuła, Ryszard Winiarski, Jan Chwałczyk, Jan Ziemski, Adam Marczyński, Zbigniew Gostomski and Edward Krasiński.

A crisis of abstract painting, noticeable in the 1960’s, directed the artists’ attention towards the art of presentation rendering humanistic values in a more direct way. This concept was typical of „The Group of Realist Painters” including Kiejstut Bereźnicki, Janusz Kaczmarski and Benon Liberski. The Western-European trend of the so-called new figuration was

initiated in Poland with the activity of the artists from the “Wprost” group (trans. outright): Maciej Bieniasz, Zbylut Grzywacz, Leszek Sobocki and Jacek Waltoś; enagaged in reflections on human existence and commentating on the current phenomena relating to the customary, social and political spheres. The works also inscribed in that trend were the works referring to the “art brut” stylistics of Eugeniusz Markowski, a painter of human loneliness – Marek Żuławski, as well as Andrzej Nowacki and Teresa Pągowska. The “journalistic” character of works was the domain of artists particularly active in the 1980’s, the period of extreme significance in the Polish history: Andrzej Bielawski, Edward Dwurnik, Ryszard Gieryszewski, Janusz Przybylski, Jerzy Puciata, Jacek Rykała, Jacek Sempoliński and Wiesław Szamborski. At the same time, the trend of the so-called “new wild artists” emerged, who used expression and colour, and often grotesque and wit to comment on the existing reality. The group that is particularly distinguishable within this trend is the so-called “Gruppa” – Ryszard Grzyb, Paweł Kowalewski, Jarosław Modzelewski, Włodzimierz Pawlak, Marek Sobczyk and Ryszard Woźniak, as well as a painter and a graphic artist from Cracow – Jacek Sroka. The new expression was also applied in the works of Tadeusz Sobkowiak and in early realizations of Grzegorz Klaman. The realistic trend is inscribed in the circle of surrealist- metaphoric painting with the works of Anna Güntner, Jerzy Krawczyk, Jan Lebenstein, Bronisław Wojciech Linke, Kazimierz Mikulski, Zbigniew Makowski or Henryk Waniek, filled with fantasy and magical realism. Realism filled with spirituality and mysticism, on the other hand, decorative in its form, is found in the works of Zbysław Marek Maciejewski, Łukasz Korolkiewicz and Grzegorz Stachańczyk. The artists faithful to undistorted reality were the photorealists: Miłosz Benedyktowicz, Andrzej Maciej Łubowski and Andrzej Sadowski. The real world was also the starting point for the simplification of forms and search for pure solutions in painting, which is seen on the examples of works by Tomasz Ciecierski, Leon Tarasewicz or Tomasz Tatarczyk.

The features of figuration may easily be found in the works of sculptors. The exhibition presents the works of Adam Myjak, and of Bydgoszcz artists – Aleksander Dętkoś and Michał Kubiak.

The works of Władysław Hasior are characterised by unique poetics. His assamblages are the evidence of the author’s finding of his own artistic route operating with folk, religious and national symbolism. The presented collection of realizations with the use of the camera reflects the richness of techniques and diversity of artistic approaches of Natalia LL, Andrzej Lachowicz, Józef Robakowski, Sławomir Brzoska and Tomasz Dobiszewski.

The Bydgoszcz Museum also provides a documentation of other artistic realizations with the use of the new media, the possibilities of which are zealously explored by the artists creating the newest tendencies in the Polish art. An illustration of this are the presented works of Izabella Gustowska. The exhibition provided a special place for the artistic realizations of Zofia Kulik, Zbigniew Libera and Jerzy Truszkowski, the examples of the so-called critical art – a trend that emerged after 1989, within which the artists provided their reflections on the issue of physicality and its entanglement in the context of power and culture.

The Bydgoszcz collection of art is a collection that remains open to new artistic concepts, critical reflections and gathering of the works of artists who by their active approach not only shaped the Polish art, but also became a part of the artistic tendencies of the world. Thus the Modern Art Gallery, despite its permanent character, allows for introducing modifications and complimenting it with the current works of artists.

Location of the exhibition: Modern Art Gallery – 8a Mennica Street on the Mill Island Permanent exhibition